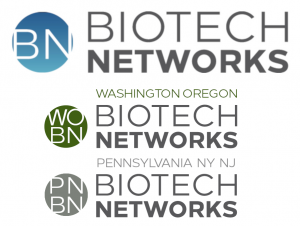 SAN DIEGO, CA January 13, 2022—Biotech Networks, the leader in connecting life science professionals since 2008, is expanding its reach by launching communities in the US in the pacific northwest and the northeast’s pharmaceutical hub. Washington Oregon Biotech Networks will connect and provide resources to individuals and organizations in Washington and Oregon state, including Seattle and Portland. Pennsylvania NY NJ Biotech Networks will serve the industry in Pennsylvania, New York state, and New Jersey, including Philadelphia and New York City. The new hubs were chosen based on feedback from Biotech Networks followers as well as the density and growth of companies and number of professionals in each area.

Pennsylvania, New York and New Jersey are home to many established pharmaceutical companies as well as world class research and healthcare institutions. Washington and Oregon are home to more recently emerging biotechnology hubs which are bolstered by high performance computing and artificial intelligence industries. These new Biotech Networks hubs are separated geographically and are culturally and ideologically distinct due to their histories and regional differences. Facilitating connections between members of these hubs represents an exciting opportunity to cross-pollinate innovative ideas, form new entities, and raise funding.

The J.P. Morgan Conference, widely regarded as the top biotech deal-making and investment meeting of the year, was abruptly shifted from in person to virtual shortly before it began this week. This instability is emblematic of the challenges facing the biotech industry due to COVID-19, and increased development of effective virtual events is vital to the continued success of the sector.

Biotech Networks began connecting life science professionals in 2008 in San Diego and had previously expanded into virtual hubs in the San Francisco bay area, Boston/Cambridge, and Los Angeles. The organization has served to connect professionals within and between biotech hubs online since 2020 through state-of-the-art virtual event platforms, including Hopin and Brazen. Biotech Networks will host virtual monthly networking and career development events throughout 2022 to enable life science professionals to learn and make targeted one-on-one connections via video.

Biotech Networks will welcome life science professionals in their new Washington/Oregon and Pennsylvania/New York/New Jersey hubs to their virtual speed networking event in late January, and to their career fair in early February. Companies wishing to leverage Biotech Networks’ events and reach their 50,000 followers can learn more about sponsoring each event on the event landing pages accessible through the Biotech Networks website.